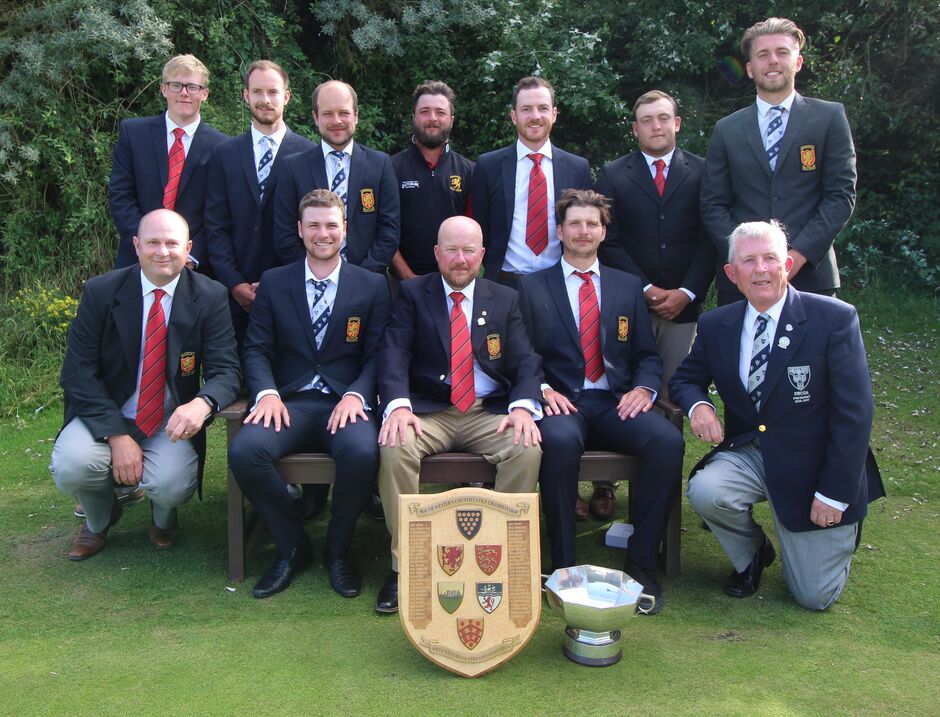 The competition was hosted this year by Weston-super-Mare Golf Club - and what a magnificent job they did too! The course was in splendid condition, the greens running fast and true and the wether played it's part by remaining bright and sunny all week. There was some wind to give a true links feel to the course, described by the members as a light zephyr, to the rest of us slightly more than that!

Our opening fixture was against our nearest and dearest rivals from Gloucestershire, and the team was determined to come out and perform to the best of their abilities from the off. They had been well prepared by Captain Justin Lane and Coach Russell Covey and were determined to repeat the success of 2015 on home turf. In the end, thing could hardly have turned out better. We won the Strokeplay team event to secure a place in the England Golf County Finals at Trevose at the end of September. We also secured the Matchplay Shield, winning our opening four fixtures before succumbing to Cornwall on the final day by the narrowest of margins.

Individually, Will Poole from Mendip Spring was the Individual Strokeplay Champion, two rounds of 65 saw him record a score of 10 under par. Runner-up was Taunton & Pickeridge's Sam Sloman, whose birdie putt on the 18th just slid by leaving him a shot behind Will. Tom Plumb wea the 3rd highest points scorer over the week with 7, closely followed on 6.5 by Phil White and Sam Fernley.

A fabulous week for Team Somerset, and we must commend the Members and Staff at Weston-super-Mare for their tremendous hospitality both before and during the event. They gave us a course in excellent condtion for the week and allowed us the opportunity to practice on the course in the run up to the competition. All of the arrangements were professionally planned and executed and the event proceeded like clockwork. Everyone at the Club should be extremely proud of themselves and the reputation that they have built amongst the counties of the South West.

Tem Somerset will be representing the region at Trevose in September. There will be a number of high quality players available for selection, and we know that they will be given every support to allow the team to do well and achieve ther goal of Champion County.

A tremendous start in the singles with 5 wins and two halves gave us a 6-2 lead at lunch. Tom Sloman set the standard with a convincing opening win of 6&5, and he was backed up by Phil White, Tom Plumb, Ali Balcombe and Matt Turner. Gloucestershire fought back in the afternoon and the foursome were halved with 3 points each.  A great win over our northern neighbours giving us the best possible start.

After losing narrowly to Wiltshire in our opening Channel League fixture, Team Somerset were determined to achieve a result in this match. The team came flying out of the blocks, Tom Sloman, Will Poole, Phil White and Tom Plumb and Sam Fernley winning the first five singles. Wiltshire again proved to be doughty opponents, taking the last 3 matches to narrow the gap.

They continued the pressure in the afternoon, winning the first of the foursomes to close the gap to just half a point. Phil and Sam steadied the ship with a half before Matt Turner with jeremy Larcomber, then Tom Plumb with Josh Hilleard secured the last 2 matches to complete the victory.

This was the big prize - the chance to qualify for the national County Finals again and hopefully go one better than in 2015 when we finished runners-up. This was what all the dedication, hard work and practice was for. If it was difficult to slect the 10 players to represent us for the week was difficult, Team Somerset were bolstered by the return of some of the big guns who had arrived for this. Captain and Coach  deliberated long and hard - and there were few amongst the supporters  who envied them the task!

The pressure was on, we were on our home turf, we knew our players were in form, and we knew the expectation was for a Somerset win. All credit then to the six for keeping their nerve to play some superb golf to secure the win, a 19 shot margin of victory over Gloucestershire in second place.

Will Poole was the stand out performer shooting 10 under par, Jamie Clare not far behind with rounds of 66 and 69. Sam Fernley kept his composure to shoot a 2nd round 67 whilst Josh Hilleard, Tom Sloman and Phil White were also in splendid form to maintain the first round lead and bring the title back home!

After the celebrations had died down, it was back to business for the team as they prepared to take on Dorset. Another purple patch in the singles with five straight wins gaves us a 5-3 lead at lunch. The foursomes were also a repeat of the Wiltshire match - 2 wins, one half and one loss gave us an additinal 3.75 points to complete the win.

A convincing win over Devo put us in sight of the Matchplay Shield, but we were keeping an eye on potential challengers Cornwall and Gloucestershire who had only lost one match each.

The singles started well for us with wins for Ali Balcome and Tom Plumb plus a half from Jamie Clare before devon began to fight back by taking matches 4 and 5. Phil White, Tom Sloman and Will Poole won each of the last 3 matches to give us a 3 point lead at the halfway stage.A clean sweep in the afternoon foursomes earned us the win, but matches were close and the result was closer than the score might suggest. Dorset and Wiltshire both did us a favour by halting the challenge of Gloucestershire and Cornwall. Their wines meant that we had secured the Matchplay Shiled with a day to spare!

A very close match against Cornwall was eventually lost by just half a point. The morning singles went marginally in our favour with a 1 point advantage at lunch. Wins from Will Poole, Sam Fernley, Johhny Grace and Matt Turner securing a scoreline ogf 4.5-3.5. Team Somerset finally ran out of steam in the afternoon. losing the foursomes 3.75-2.25. The highlight though was skipper Justin Lane making an appearance on the day and partnering Johnny Grace to our win in the afternoon.

What a performance from the team - we were all so proud of them, and will be giving them all the support we can to help them prepare for the National Finals!

FOR THE FULL RESULTS FROM THE WEEK PLEASE CLICK HERE 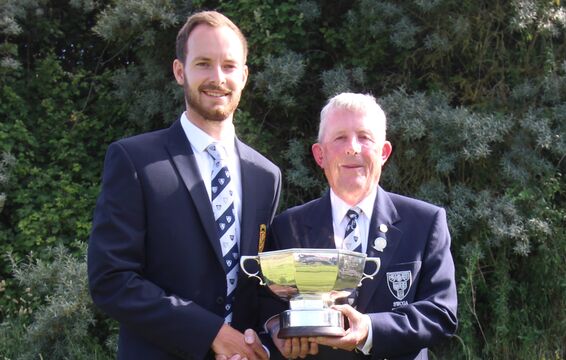 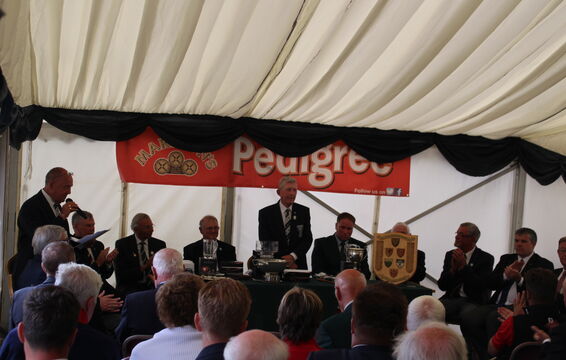 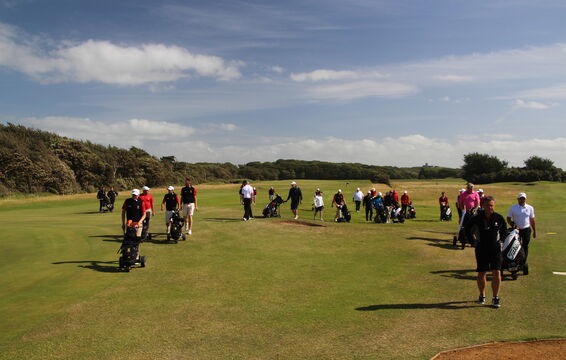 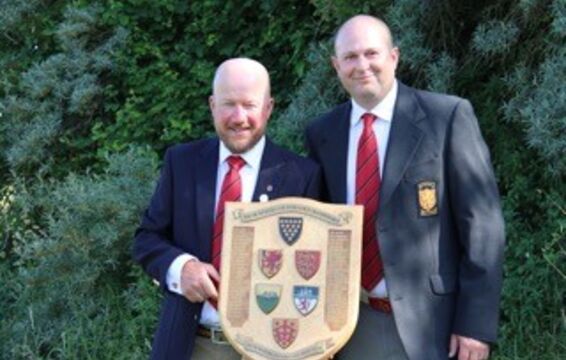 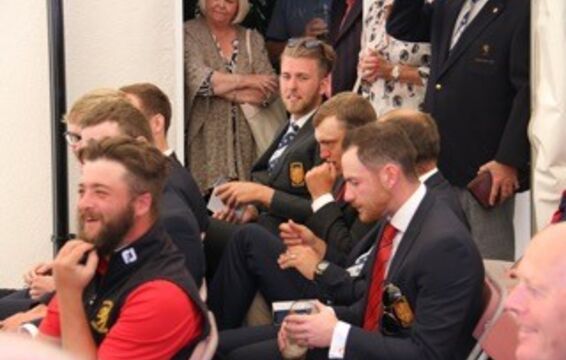 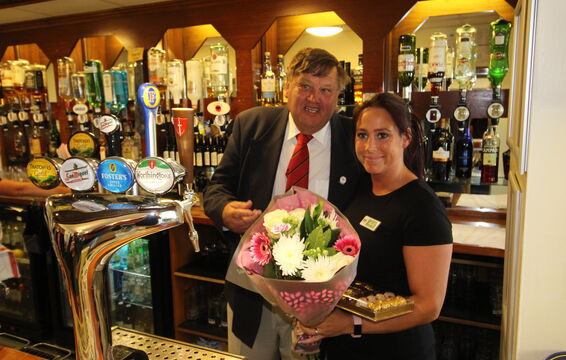 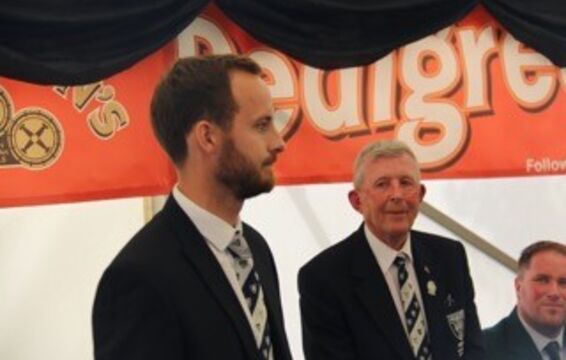 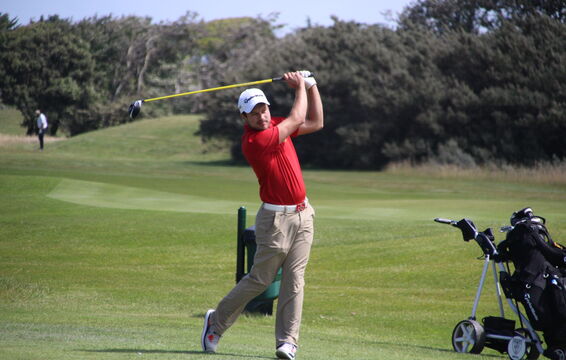 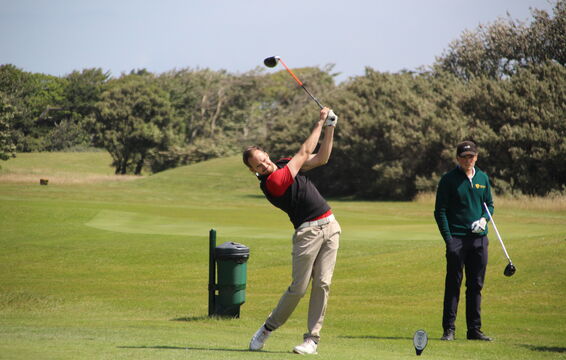 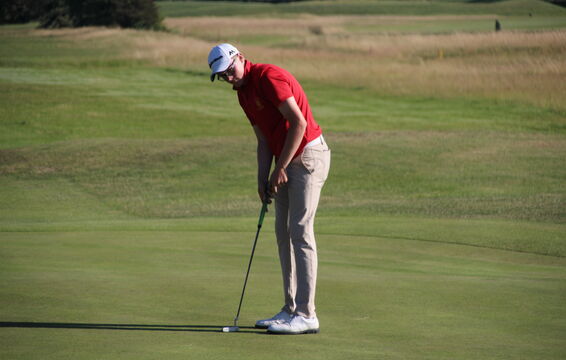 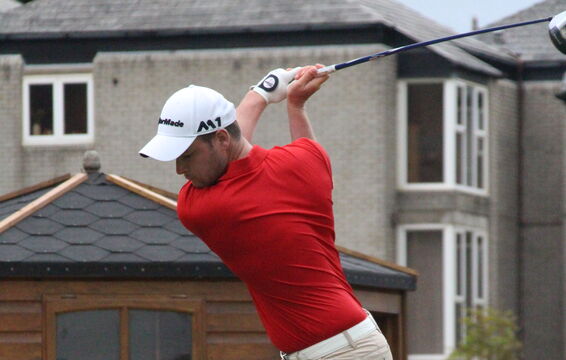 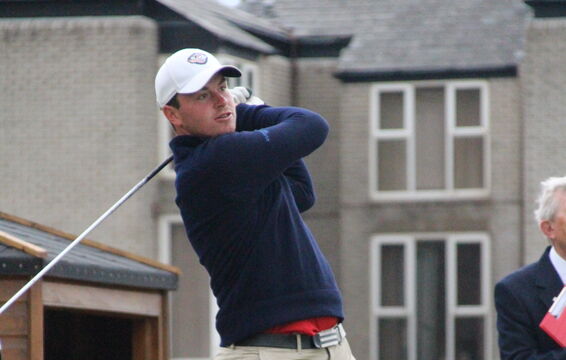 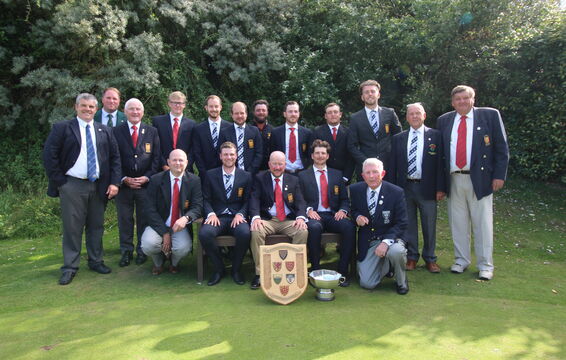 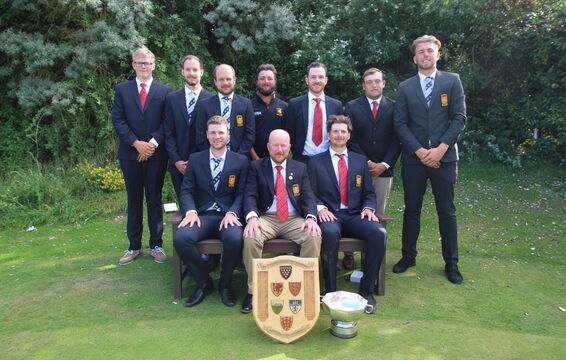 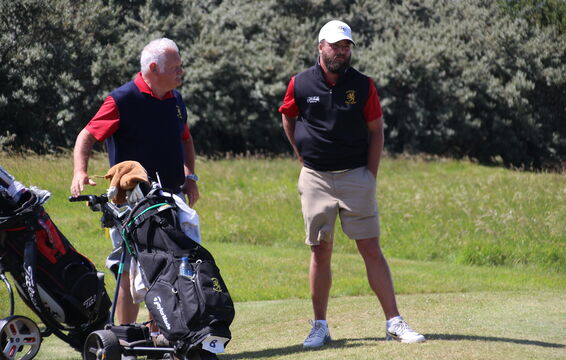 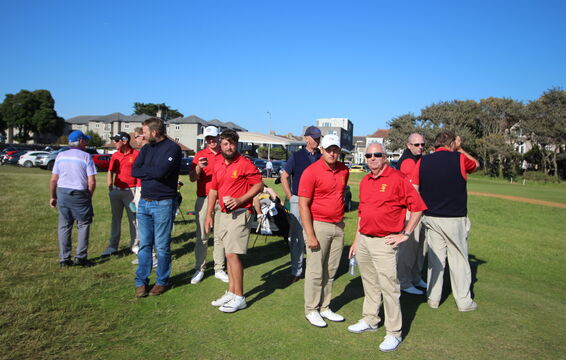 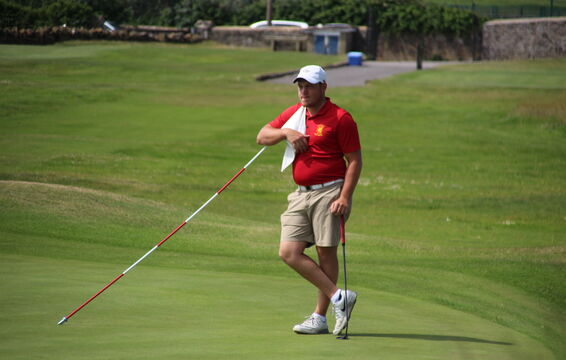 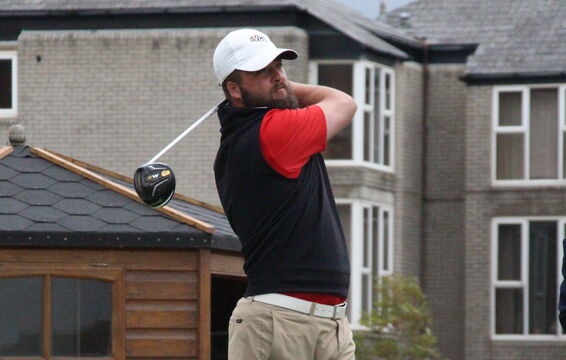 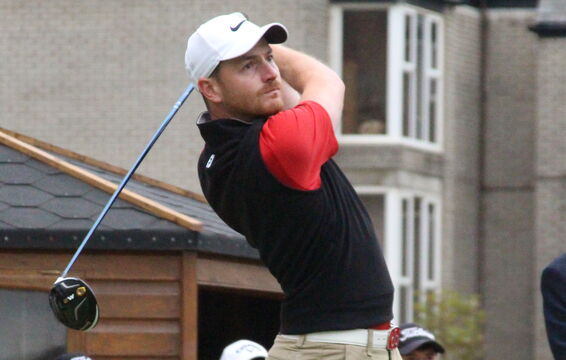 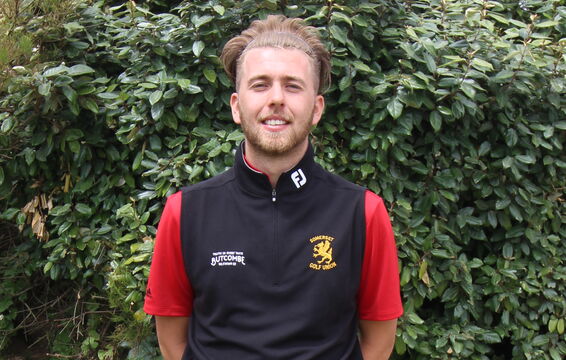 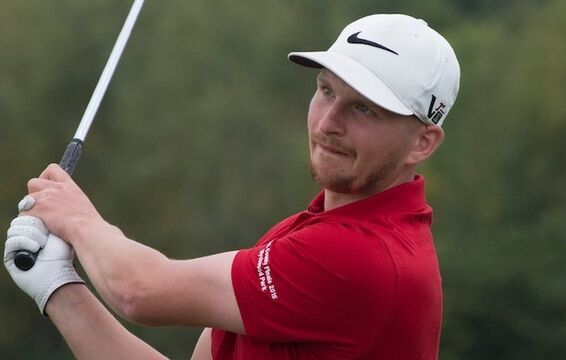 Plyers at the presentation

Thanks Sarah - You played a blinder!