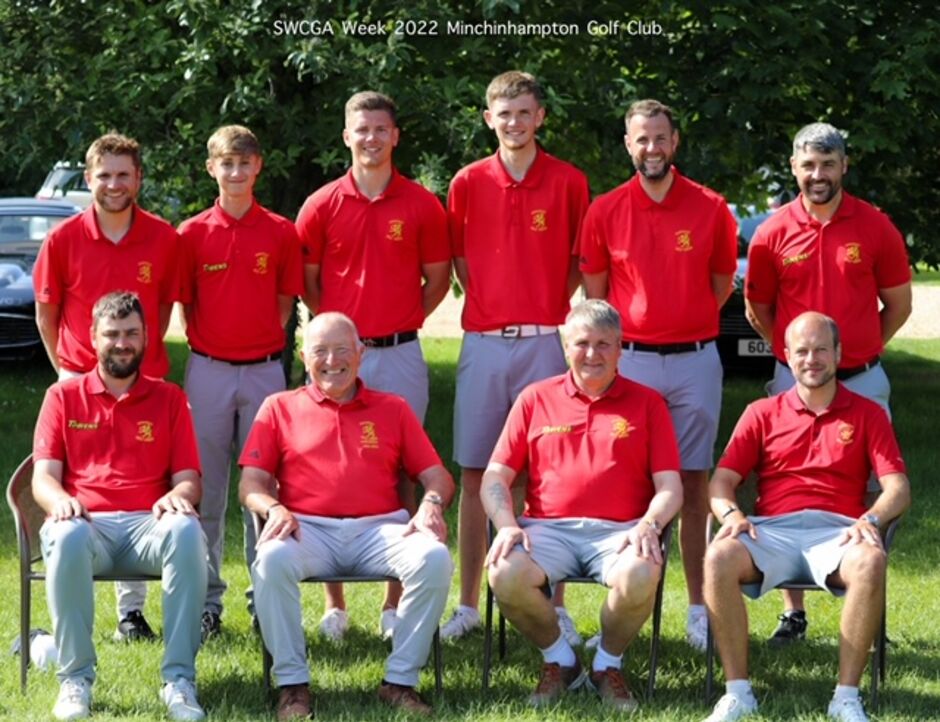 The team was a fine mix of youth and maturity.

9.25 – 4.37 sounds straightforward, nothing could be further from the truth. The 8 morning singles were in the balance through 9. Freddie Turnell (Burnham & Berrow looked solid and maintained his form winning 4/3. Huxley Howell (Saltford) was level par through 4 and 4 down! Losing 7/6. Olly Brimfield and Tom Trowbridge | Burnham & Berrow) ground out wins, 2 up and 2/1. As did Craig Adams (Tall Pines) 2/1. Out top Phil White (Burnham & Berrow) went down 4/3, Andy Isaacs (Long Sutton) lost a ball at the 15th and in losing the hole went 1 down. Andy took the game to the 18th but couldn’t get the hole back, losing 1 down. The last game out, Jack Palmer (Burnham & Berrow was 3 up but a swing in fortune and form saw a run of losing holes and a 2up win to Devon. 4-4 all at lunch, all to play for with 1.5 on offer per foursome match. Match 1 Phil and Freddie reached the last 1 down. Par 5, dive, 5 iron, putt! Eagle 3 match drawn! Match 2 Huxley and Olly, Level through 15, 1 hole win. Match 3 Jake and Andy. Level through 15, win 2/1. Craig and Tom, 1 up through 15, and a 1 up win. 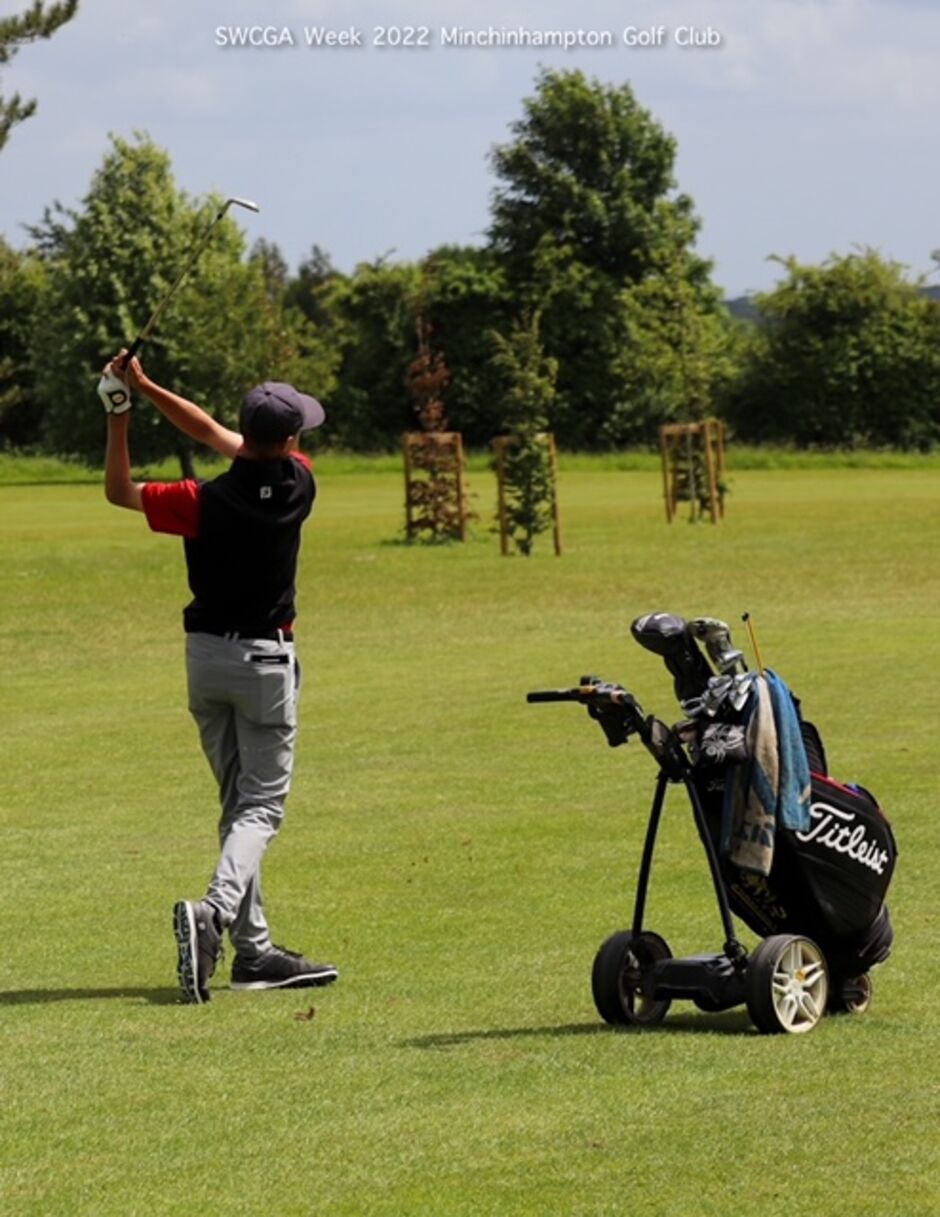 The morning singles ended with honours even at 4 – 4. Wins for Olly Brimfield, Phil White, Josh Stancer and Craig Adams. The afternoon Foursomes started well as Andy Isaacs and Jack Palmer raced out of the blocks winning the first 3 holes. Andy and Jack reached the turn 4 up and never looked back closing out the game at the 15th. Olly Brimfield and Huxley Howell were 2 down early but reached the turn level. As did Craig Adams and Tom Trowbridge. Match 4 Phil White and Josh Stancer looked in total control going 5 up but lost the 9th and had a fight on their hands as the Gloucester pairing refused to give in. Back to 3 and looking in danger of losing the 15th until Josh holed from 15 feet and in doing so won the hole against the head. 3 up 3 to go. Up in front a birdie 3 at 15 saw Olly and Huxley go 2 up just as Craig and Tom went down 4/3. Match level on 5.5pts each Somerset were well in the driving seat going down 16. Olly and Huxley halved 16 and 17 to win their game and the match Phil and Josh followed winning 3/2. Great result Somerset 8.5 Gloucestershire 5.5. Next up 36 hole EG team qualifier, our 6 have been selected, good luck team Somerset.

Delayed start due to fog 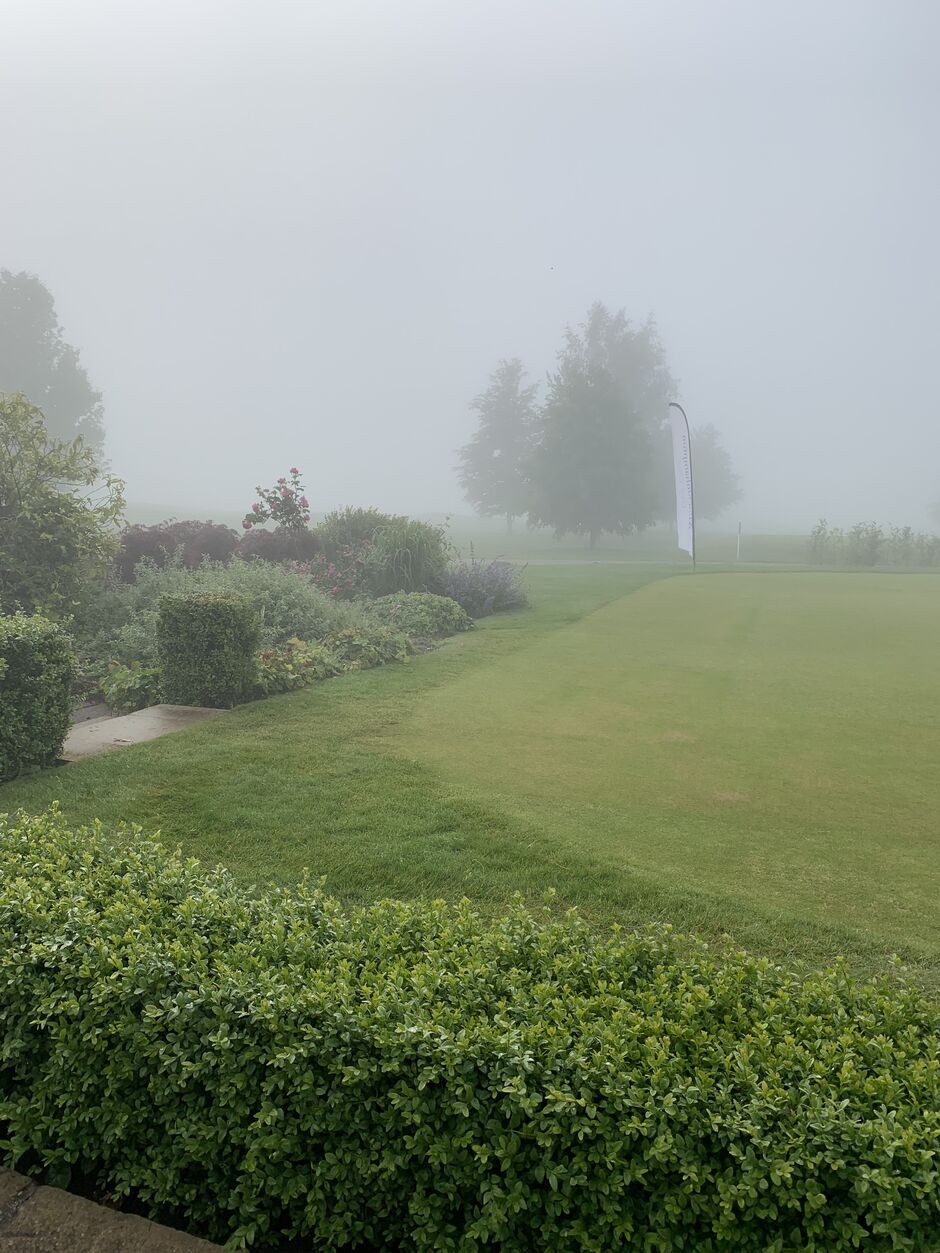 Eventually won on by Gloucestershire. (Teams of 6 playing 36 hole medal) Gloucestershire Gross Team Score 26 under par! Somerset were leading at lunch on 12 under, Phil White 65– Freddie Turnell & Ollie Brimfield 66 – Craig Adams 69 – Andrew Isaacs & Josh Stancer 71. The afternoon round say Freddie follow up his 4 under am score with a 3 under 67. Freddie finished joint 4th in the individual at -7. Craig’s 69 was alas the only other sub 70 as Somerset finished 3rd overall. The individual was eventually won by Gloucester’s Nick Day following a three way play off. Worthy of note, the course record was smashed by 4 shots as Wiltshire’s Joe Retford 61 gross (out in 1 under, back in 8 under!)

Hot out the blocks win wins for Olly 4/2, Phil 5/4, Tom 3/2, and Freddie 6/6. Match five halved, match six and seven both lost and match eight halved.  5/3 at lunch. Out top in the foursomes Phil and Freddie, match two Andrew Ferris and Josh, match 3 three Jack and Andrew Issacs, match four Craig and Tom. Always in command and looking like a clean sweep of the points with wins for Phil and Freddie 3/2, Jack and Andrew 5/4, and Craig and Tom 4/3. Only in match two did we fail to pick up the win, as Andy and Josh halved. 10.25 – 3.75 was a convincing and well deserved result against a Cornish side who didn’t turn up on the day. Next year Somerset will play Cornwall at Perranporth day one, Expect a much tougher challenge! 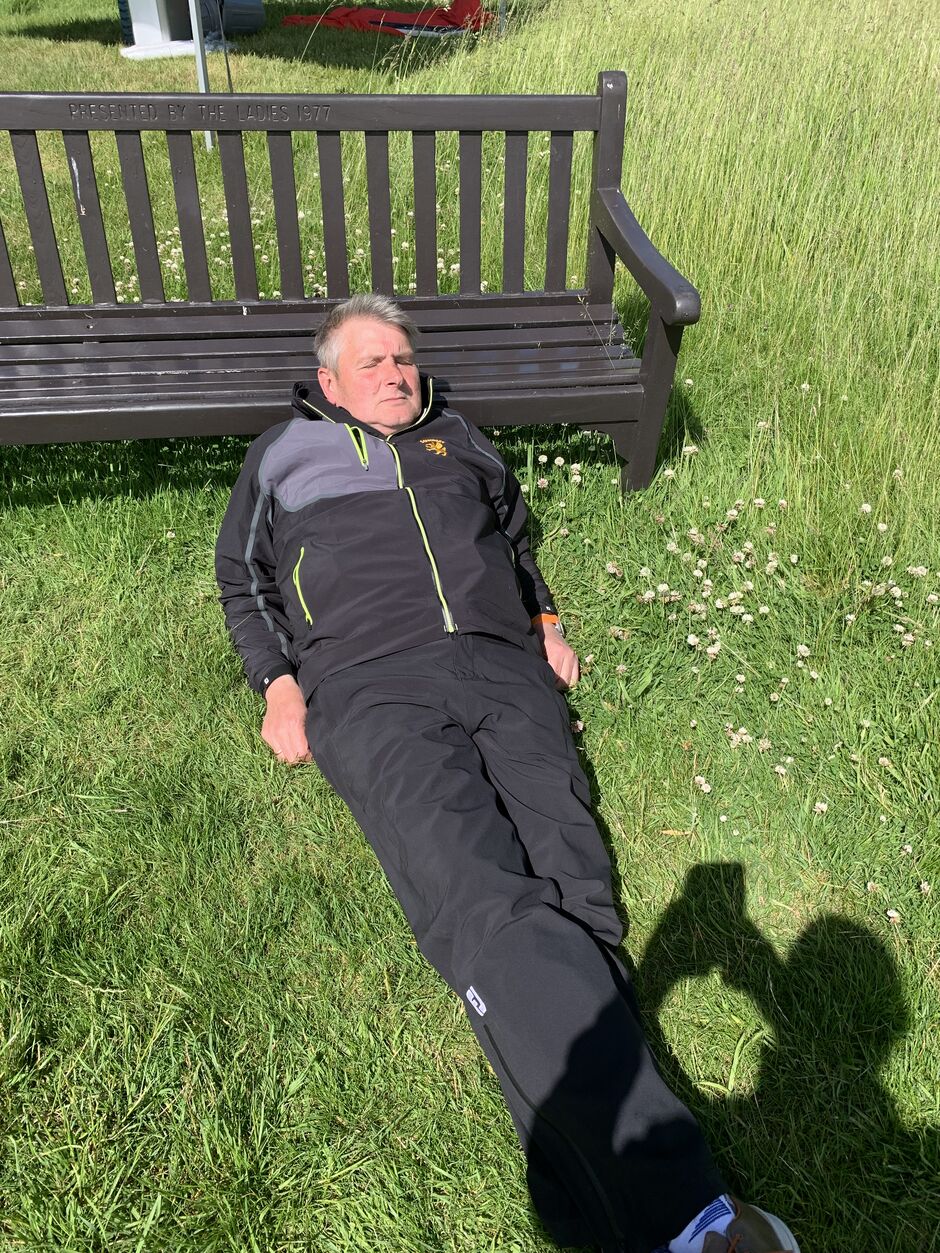 Dorset had yet to record a win! “What could go wrong”? Thankfully very little in the am singles and at lunch we were sitting pretty 6.5 – 1.5 up. Wins for Freddie Turnell, Josh Stancer, Andy Ferris, Tom Trowbridge, Huxley Howell and on debut Curtis Edwards. But there is always that niggling fear in the back of a captain’s mind at South West Week, what if we lose all the afternoon foursomes! To lose all foursomes and the match!  First result of the afternoon, match 4 Andy Isaacs and Jack Palmer lose 5/3. Next result match 3, Craig Adams and Tom Trowbridge lose 3/2. Match score 6.5 – 4.5 as Dorset close the gap. Matches 1 and 2 were both live going into the 16th and both games in the balance. Match 1 Phil White and Freddie Turnell, match 2 Andy Ferris and Josh Stancer. Thankfully when the going gets tough the tough get going! Phil White has played so many matches for Somerset, but very few partnering someone as young and inexperienced as Freddie Turnell. That said the pair are undefeated this season, Freddie’s debut season in Channel League and South West Week. I am so very pleased to report that Freddie may be young and lacking years of experience but he’s certainly not lacking bottle and an abundance of talent. Phil and Freddie closed out their game 2/1 and with it the overall win that the red army needed to remain top of the table with one game remaining. And with the last game going to the 18 and ending in a halved match Somerset had won 8.75 – 5.25.

Going into the final day the Red Army needed a win or a draw to top the match play table guaranteed. If Gloucestershire won against Cornwall and we lost to Wiltshire the title would be decided on the overall match score points combined meaning that Gloucestershire had to win big and hope, we lost! Gloucestershire was the opening match of the morning and were convincing winners of the am singles. Our match was not looking good as the contest moved on to the back 9 holes. Phil White leading the way recorded yet another win 4/3. Out last Curtis Edwards was dismantling his opponent and having closed his game 7/6 was on hand to give support to his struggling teammates. With 2 in the bag our advantage was quickly wiped out as Andy Isaacs, Andy Ferris and Huxley Howell all lost before the 16th. At 2-3 Wiltshire were favourites to come out on top. In match 2 Tom Trowbridge was 3 down going to the 14th. Freddie Turnell and Josh Stancers games went to the last. Josh and Freddie both won on the last as all present expected a 4 – 4 morning score. Step forward Tom Trowbridge, winning the 14th, 16th, 17th and 18th to turn his game on its head and give Somerset a precious 5 – 3 advantage.

Needing to reach 7.5 pts a win and a half in the foursomes would see the team over the line regardless of Gloucester’s result. As the afternoon unfolded the captain’s decision to drop Phil and Freddie down to match 3 looked a sound call, winning 4/3. Tom and Huxley out top lost 3/2 as did Curtis and Josh at the tail. With only one match remaining Jack Palmer and Andy Issacs took a commanding 2up down the 16th and closed out their game at 17 winning 3/1. A jubilant gathering of players, caddies, officials, and supporters greeted Jack and Andy, job done. 5 wins in a row and top of the table performance. 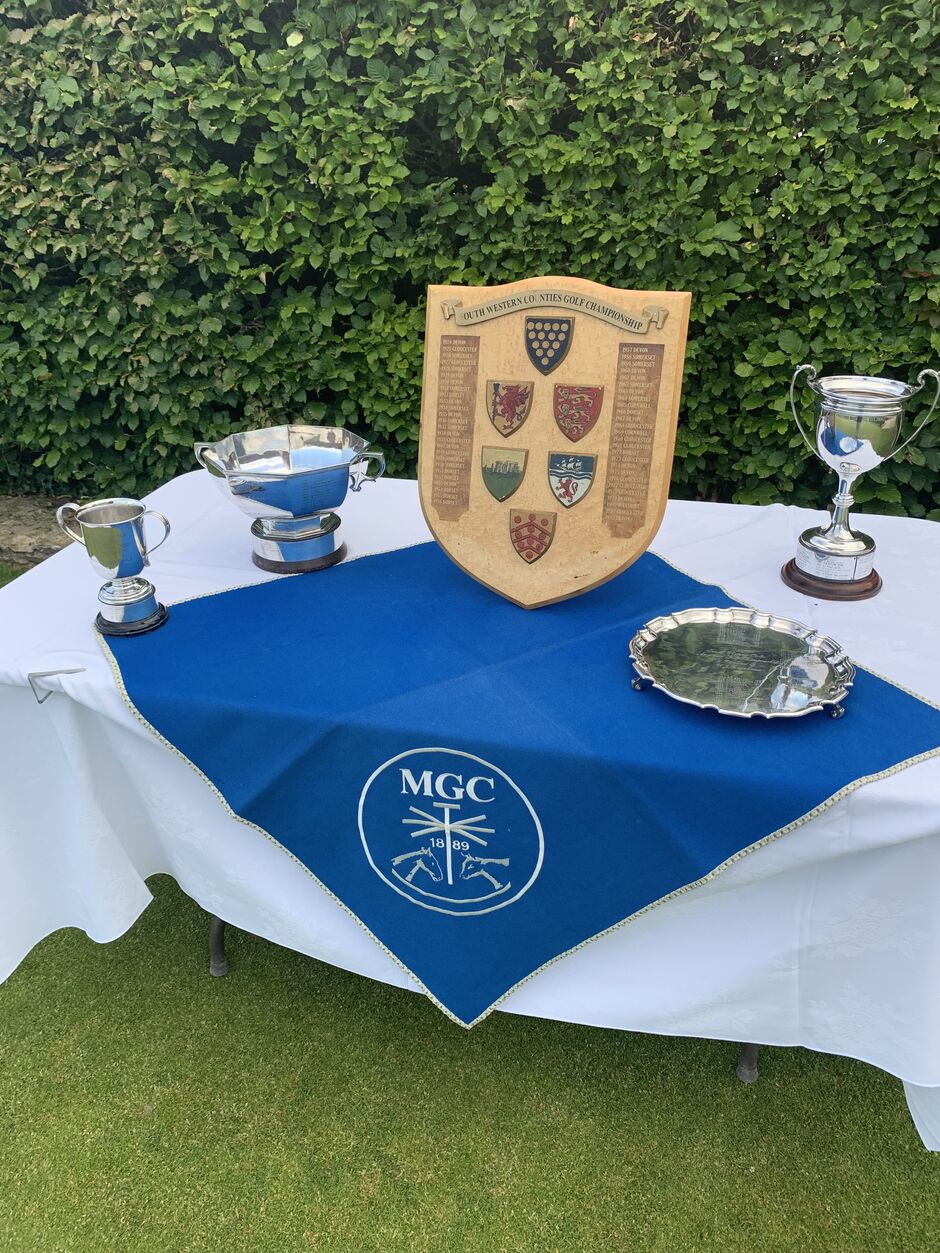 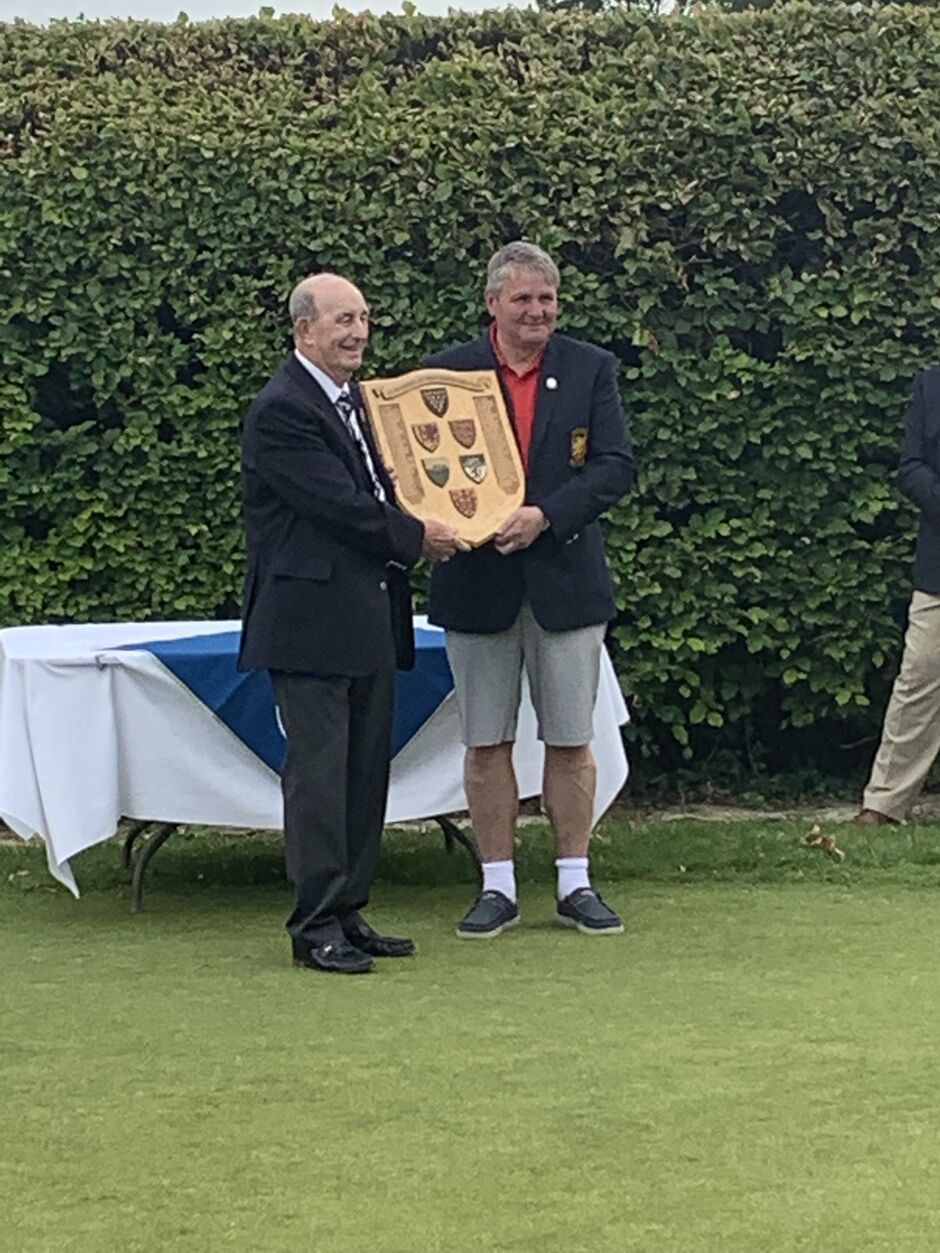 Our thanks to those who have put so much into this achievement since the bitter disappointment of South West Week last year. A well balanced team of youth and experience, a united team on and off the course, a solid coaching programme in development and a captain and head coach who’s provided the platform for this.

Also, to our sponsorship partners, thank you for supporting Somerset Golf Union.

Somerset Golf Union are pleased to announce the appointment of Simon Shanks, European Tour Coach as Head Coach of the SGU. 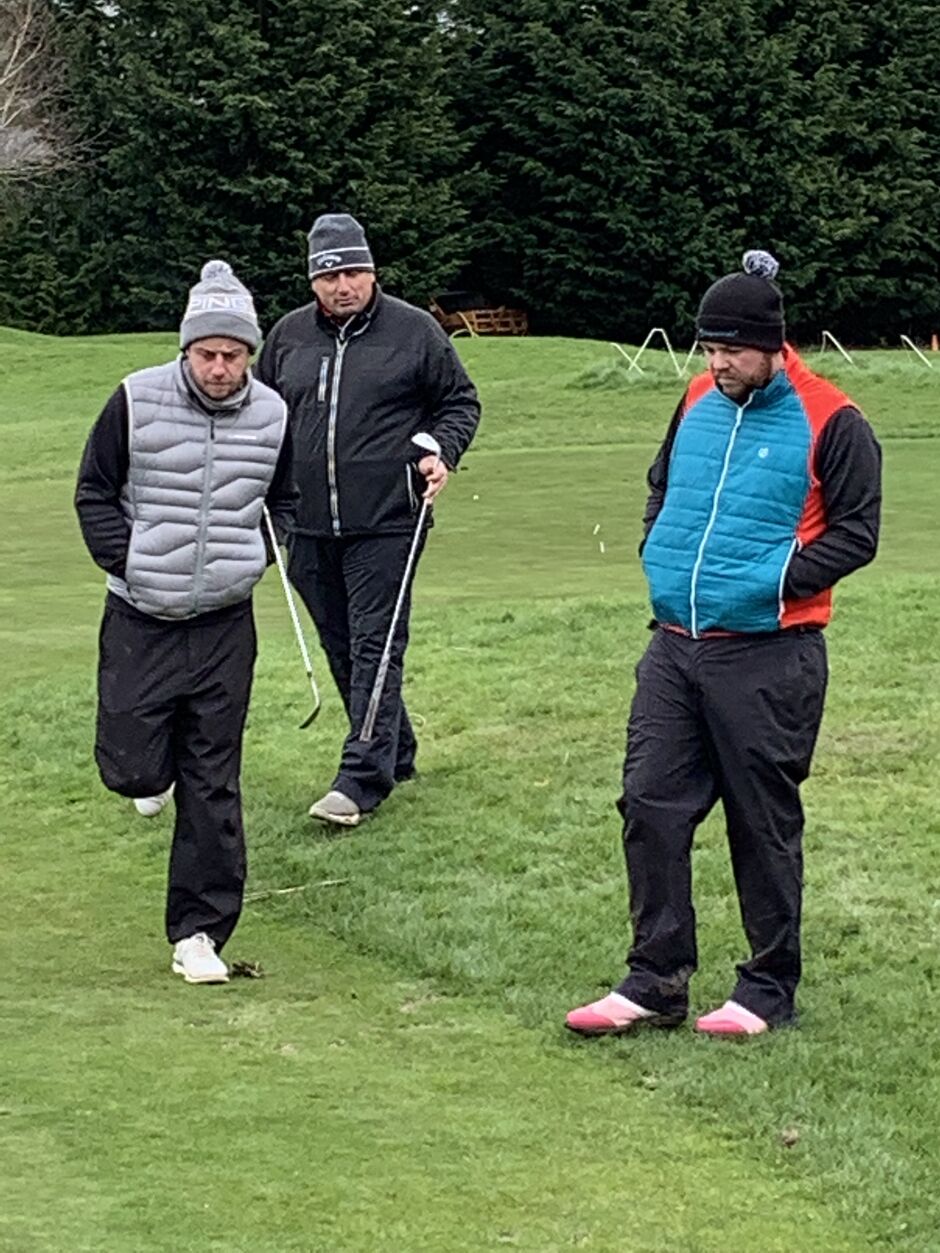 SIMON SHANKS is building himself a big reputation as one of the best golf coaches on Tour – with his players’ performances proving his point.

Simon Shanks is a Golf Teaching Professional with 20 years’ experience that works on the European Tour as well as his home club at Bowood Hotel, Spa & Golf Resort.

His seamless and effective coaching methods have built confidence in his pupils which so far have amassed wins professionally worldwide. Simon grew up in Wiltshire and has taught at Bowood the past 15 years.

Let me guide you to reach your golfing goals 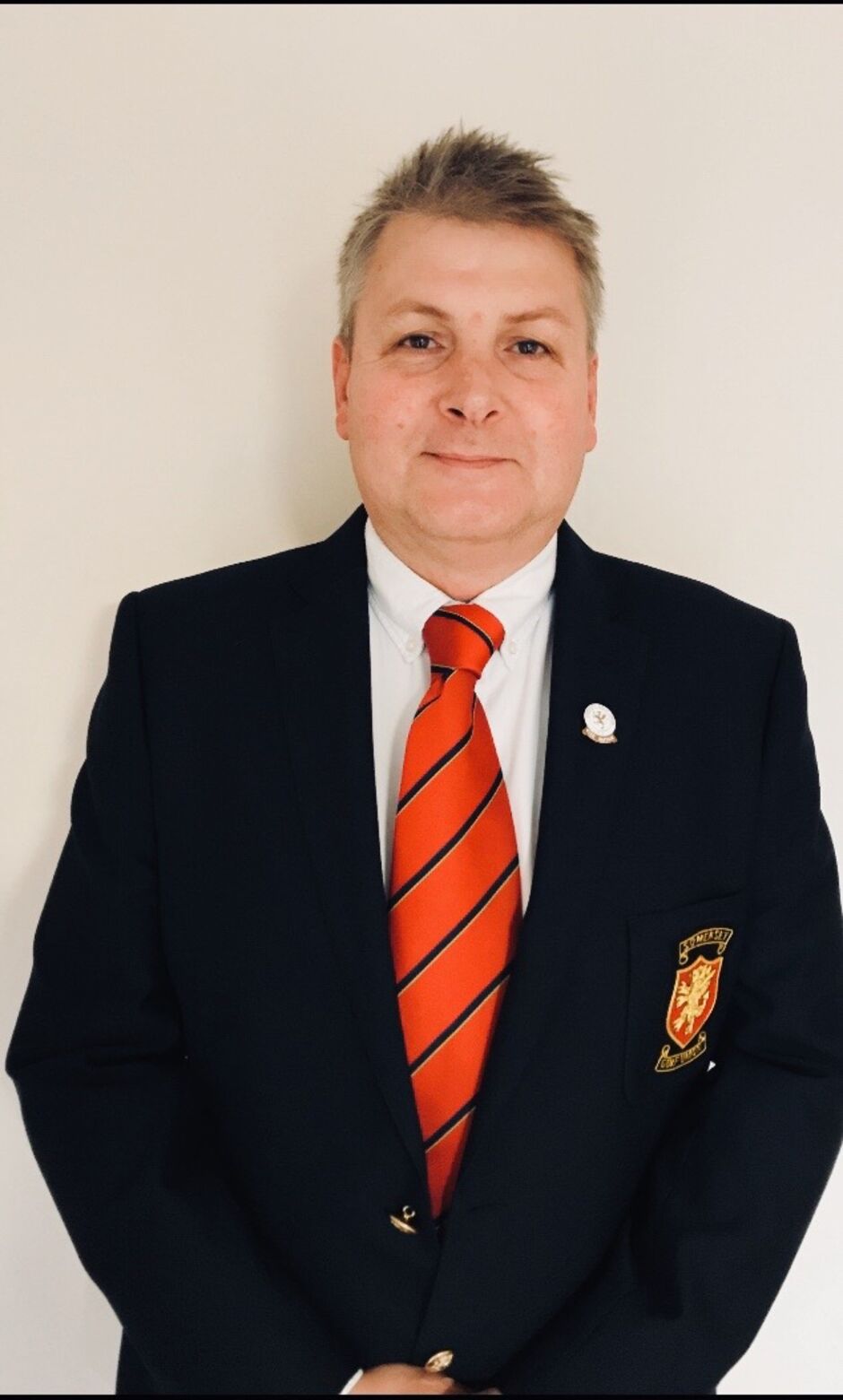