Played over 36 holes at Farrington Park on Sunday 8th May the U18 & U16 County Championship was played on a hot sunny day and on a well presented and what proved to be a difficult challenge. Our thanks to Farrington Park for hosting this year’s event and to those who took park. Numbers were less than expected. Some of the better juniors were unavailable as fixture congestion continues.

The morning only returned 4 scores below 80. Gross 79, (handicap 10) Troy Young (Worlebury GC) headed the field in the U16 Championship. Seeking back to back wins having won the U14 Championship the previous year.

U18's Dylan John (Saltford GC and Theo Anderson Gannon (Yeovil GC) both returned gross 76 but leading the U18 at lunch with the best round of the day Thomas Cavanan (Enmore Park GC) 73 gross. 3 over through 8, birdies at 9, 11 and 13. Dropped shots at 12 and 15, par birdie par finish. Solid golf, well played.

On to the afternoon and for some 36 holes took its toll physically as golfer after golfer completed, collapsed in the corner, and went home to sleep! Scores were not good, with the odd exception.

Tom Cavavan's afternoon round started poorly and unfortunately for Tom did not improve, disappointed by his afternoon return, he will take many positives from his am 73 and learn from the less impressive afternoon effort.

On 158 last year's U16 & U18 Champion Alex Marshall (Farrington Park GC)  came up short in his defence of the U18 Championship finishing 3rd overall.

A very popular runner up, (and good to see back on the course) Jackson Carey (Farrington Park GC) 80-77-157. Out first following a last minute entry, he remained to support all competitors to the very end.

The 2022 U18 Championship was eventually won with scores of  76-78-154 by Dylan John (Saltford GC) Dylan’s consistency and competitive edge was rewarded and well deserved.

A poor start R2, double's at 1 and 2 followed by another dropped shot at 3! A lesser golfer may have given up but not Dylan. Steady pars and a birdie at the 7th, out in 40.. Earlies gains at 11 and 12 providing the platform to see off the opposition. In winning the U18 event Dylan will get his change to represent the county in this year's National Finals. We all wish you well.

Dylan 's brother Dewi John was runner up in 2021 and unavailable this year because of school exams. So for now bragging rights sit with Dylan at home!

Played at Wells GC on Sunday 11th July the County Junior Championship finally got underway having been postponed due to lockdown at the beginning of the year and cancelled in 2020.

Combining age groups U16’s to U18’s the assembled field competed for 2 trophies as competition got underway at 8am.

Our thanks to all at Wells Golf Club for hosting the event espicially members for giving up tee time on a Sunday. The course was in fine condition and catering was available throughout the day.

At 8am the weather was good, by 3pm the rain swept in from the Southwest and by close of play the course was just about under water!

As the morning scores came in the early starters in the upper age groups had played well. Leading the field on level par, Alex Marshall (Farrington Park) an U16 who commanded top spot in the U16 and U18 championships. Dewi John (Saltford) on 72, Jackson Carey (Farrington Park) and Tom Canavan (Enmore Park) all remained in close contention as scoring became more difficult as the weather began to turn.

As the afternoon round got underway the temperature dropped considerably as light rain gave in to persistent rain and eventually torrential rain.

Credit where credit is due as Kyle Miller (Taunton & Pickeridge) Harry Selwyn (Clevedon) and Ashton Wylie (Wells) all improving on am returns. But no one was able to match Alex who commandingly stretched his lead in both age groups, winning by 5 clear shorts from Dewi. 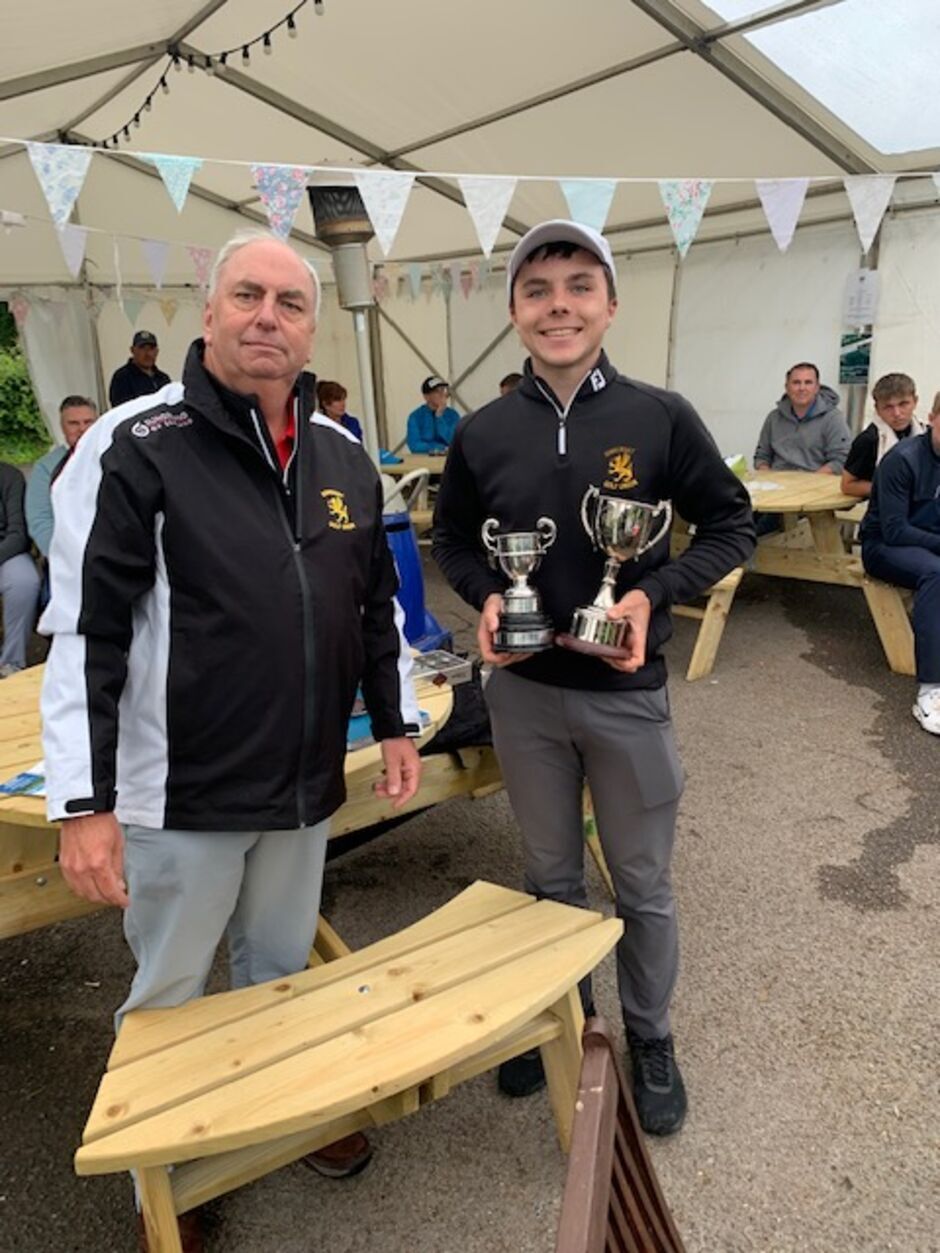 Alex Marshall pictured with both U16 & U18 Trophies