A very well-presented course met us on arrival at Launceston, heavy overnight rain created soft conditions which provided a challenge as the greens were slower than normal. The morning games set off with the strong pairing of the Cornish 1st pair who dispatched Andy Harriot and Andy Fisher 2/1: Second up were the Oake pairing of Ward & Rudd who were never troubled winning 3/2: Newcomer George Hampshire (Minehead & West Somerset) partnered by Burnham stalwart Frank Ward returned a strong half: Both Adrian Deakins and Tim Jones were unable to take the result over the line and finished 1 down; to complete the morning saw Rob Chandler (Mendip Spring) and Neil Holbrook (The Mendip) securing another strong half to set the morning at 2 points Somerset and 3 points Cornwall. I heard later in the day the Cornwall team was a little taken aback by the mornings play!

With the weather improving, the singles set off with the team’s leadoff man Andy Harriot who is selected for his tenacity, being 3 down for most of the match, did not disappoint securing a quite excellent half. Simon Rudd again showed his superiority this time at number 2 with a great point. Andy Fisher was up against it with Kevin Mulla and despite his best efforts lost 2/1

Another point came from James Ward who was in stunning form following on from the morning and Andy Rowe was unable to hold onto him. Adrian Deakins fought hard to contain his opponent but was unable to secure the point. George Hampshire seemed to ease his way past his opponent with the same ease as his swing to return a point, a welcome addition to our team. Tim Jones was up and down in his match and but for a missed putt on 18 would have earned a well-deserved half, but it was not to be. Frank Ward and Neil Holbrook battled against good opposition but were unable to deliver leaving the tail ender Rob Chandler to valiantly take the honours in the final match making us 6½ in total against the Cornish total of 8½.

I have to say the writer’s emotions were up and down all day and only upon returning home to a glass of excellent malt did his mood relax, comforted by thoughts of the team’s excellent efforts and commitment.

Thanks to selector Jerry Hodge who supported us and kept me in check throughout the day!

Lastly a big thanks to the Cornishmen for their hospitality led by the unassuming, quiet demeanour of their Captain Paul Clehane and to the Launceston staff for their great course and fine service, thank you.

Hosted by Gloucestershire at Stinchcombe Hill Golf Club. The golf course was excellently presented and provided a formidable test given the unusual 3-way format with 3 pairs concentrating, separately on the other two pairings with equal attention in a 36-hole Foursomes match play challenge.

The morning saw Somerset missing a crucial putt on 18 which could have secured 2 full points however that was not to be, and to lay any blame on my players would not be fair after a hard fought 18 holes! a ½ with both opponents was a great result from the Burnham pair Andy Harriot & Andy Fisher: an excellent showing from the Oake Manor pair of James Ward and Simon Rudd who were never in danger returning a 2 point maximum; our remaining pairs Steve Francis & Kelvin Green (Bath), Mike Robinson (T&P) & Tim Jones (Enmore Park), and Frank Ward (Burnham) with Debutant Neil Holbrook (The Mendip) were up for the challenge but failed to stem the Devon juggernaut and the team ended up with 3 points against 7 from Devon & 5 from Gloucester in the morning session.

With a change of opponents in the afternoon session we were off to a great start with Harriot and Fisher again with a crucial putt on 18 robbing them of a 2-point maximum and settled for 1 and a ½, still an excellent day for the pair. Following them was the Bath pair of Francis & Green who salvaged a win from Gloucester but were up against the top pair from Devon who were formidable opponents indeed! The next 2 pairs of Frank Ward & Neil Holbrook and Mike Robinson & Tim Jones were struggling with both opponents and perhaps some mistakes borne out of a keen desire to turn the tables, sadly returning no points. Our last pair James Ward & Simon Rudd kept up their winning ways to end their day with maximum points to bring the team to a total for the day of 7½ trailing Gloucester with 9½ and Devon outright winners at 13 points who again earn the right to represent the Southwest in the National championship at Waterlooville Golf club later in the year.

This was a difficult test but there is certainly a feeling of quiet confidence that Somerset is lifting its game and I commend all in my team for their efforts and I, like the rest of the players, look forward to the tough challenge of Cornwall at Launceston on the 28th June.

After expressing the Somerset team’s thanks to the Gloucester Captain Nick Morris for his and his team’s hospitality on the day and also Colin Papworth’s Devon team, all a great bunch of golfers. I had the pleasure in presenting County half colour Ties and Badges to our new Seniors Team Players this year: Andy Harriot, Andy Fisher, Tim Jones & Neil Holbrook along with Full colours to Simon Rudd after completing his 10th appearance for the County.

Finally, thanks to my fellow team selector Barry Simpson (T&P) for his support on the day.

Monday 3rd May at The Warren Golf Club

When faced with playing an experienced Devon side at one of their “Home” courses is always going to be difficult; then add the weather which made the course close to unplayable in the afternoon with high winds and driving rain, the odds were certainly against us.

I very much admired the commitment and effort made by the team, which was excellent, indeed with some small shifts in results things would have been much closer.

The morning Greensomes put Somerset behind, garnering only a ½ point from 2nd out James Ward & Simon Rudd (Both Oake Manor) with teams 3, 4 & 5 losing 1 down was disappointing for all concerned. After lunch, with the weather closing in, we soldiered on and by the halfway point in the singles the wind was gusting badly, and the forecast was beginning to prove true.

Our lead out man Andy Harriot (B&B) was certainly up to the challenge of Devon’s top player Tim Aggett taking him to the 18th but narrowly losing out led the way for the rest of the team. Fellow Burnham man Adrian Deakins who can now claim to have represented Somerset at every level, gained a well fought point in match 2. Neil Folland (B&B) and Simon Rudd were unable to match their opponents, however a close fought match with Paul Vicary of Devon gave debutant Andy Fisher (B&B) a well-earned ½ as did James Ward with another Devon Stalwart Tony Alsopp. With Steve Francis (Bath) unable to overcome his man, the next 3 matches from then on were nail biting with the weather getting worse; Kelvin Green (Bath) and debutant Tim Jones (Enmore Park) both won through and Frank Ward (B&B) narrowly missed out with a ½ to settle the match with Graham Ruth

10 points for Devon and 5 for Somerset.

A somewhat disappointing result but I am certain that the team will recover and not dwell on this result and be ready for the next challenge. Competition will be keen over the season with new players joining us and I am sure the squad of some 32 players will support each other and give their very best for Somerset when selected.

My thanks to my fellow team selectors Barry Simpson (T&P) & Jerry Hodge (B&B) for their support on the day.

On Tuesday the 12th of January 2021, the Channel League committee met and discussed the 2021 season. In anticipation of early season disruption due to Covid-19 restrictions that for this season alone the Channel League structure required change.

Early season fixtures were taken out of the diary and the league split in to two mini leagues North and South. The restructured leagues will minimise travel and reduce the need for overnight accommodation wherever possible.

Somerset will play in the South mini-league along with Devon and Cornwall whilst Wiltshire, Gloucestershire, Gwent and Glamorgan will form the North mini-league.

The mini leagues will see each county play each other home and away with the winning county from each league playing a final to determine the overall Channel League winners 2021.

It was also decided that the 9 hole mornng foursomes be played as a 9 hole greensome.

County Secretaries are in the process of arranging fixtures and the Channel League Chairman will be drawing up new rules, both will be available soon.

Please keep an eye on the SGU home page diary for up to date fixture conformation. 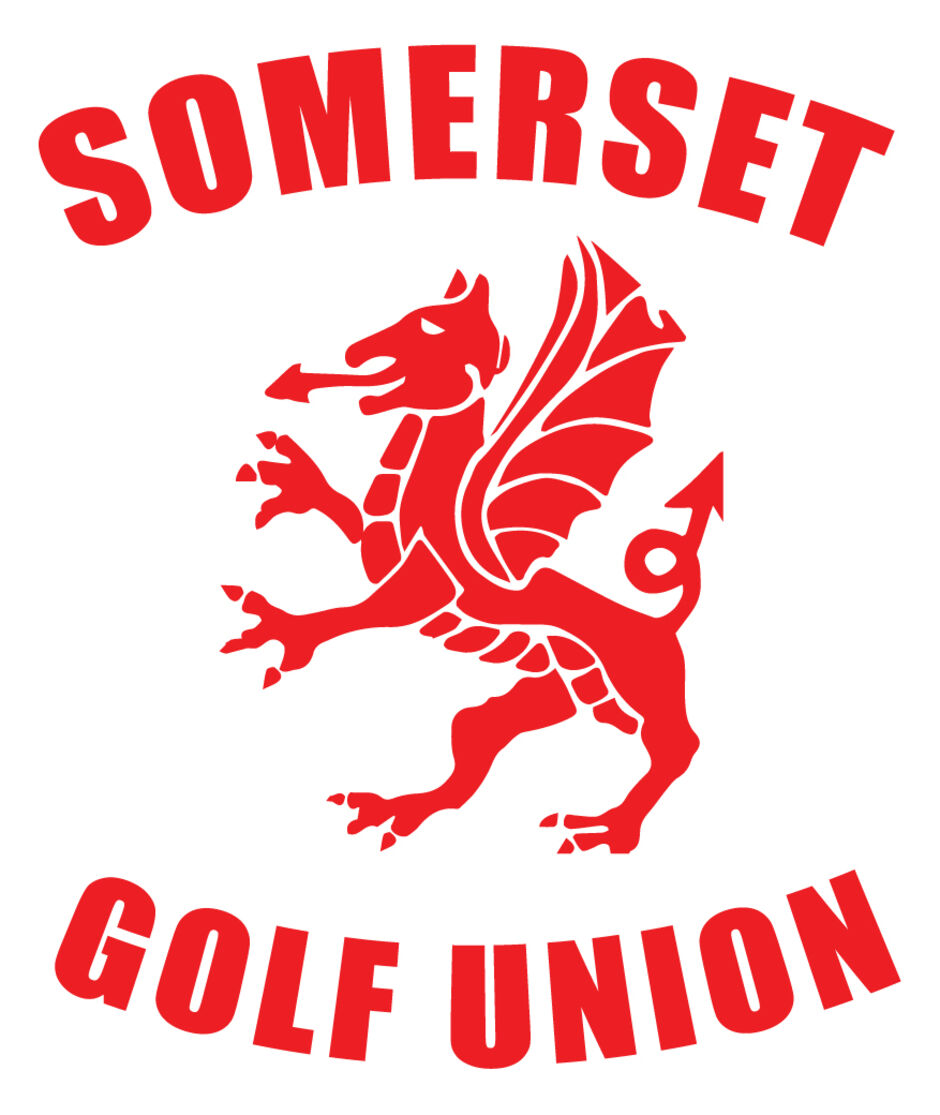 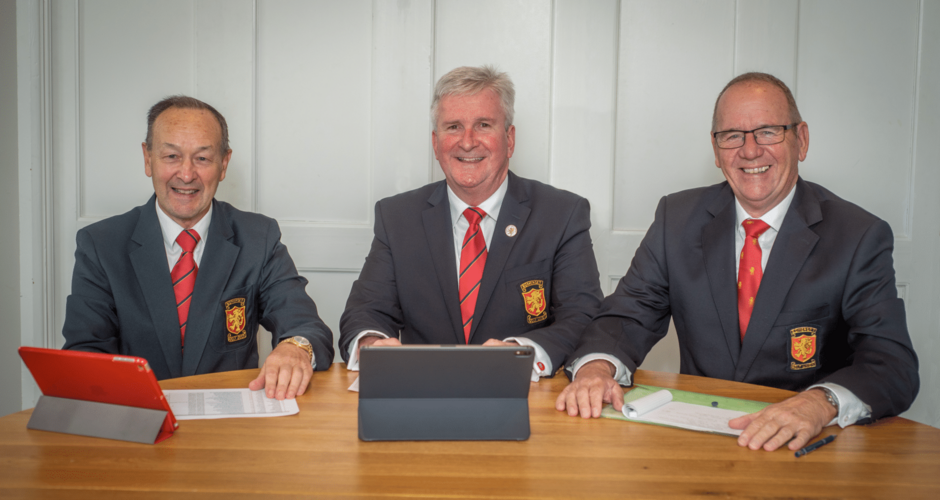 Paddy (centre) and his selectors, Barry Simpson (left) Taunton & Pickeridge, Jerry Hodge of Burnham & Berrow, contact all affiliated clubs to identify low handicap seniors who would be interested in competing for a place in the County Senior Team.

"We are in a highly competitive league with other counties being able to field players of low handicaps which has always put us in the position of having to punch above our weight, not that it frightens us (quite the contrary!) nevertheless we must build on the fine results of the 2019 season in beating both Devon and Wiltshire as the Seniors Channel league will become more and more competitive”.

This year (2021) we will be drawing on some 32 players who are available to represent the County with some new faces who I am certain will be valuable additions, but we will always be on the lookout for talented golfers as the year progresses.

NB* Any golfer currently over 55 years (or approaching this milestone in 2021) with a handicap of 5 or less should consider finding out more about what’s involved in playing representative team golf at County level. Read the Factsheet (click the button on the right) and contact either Paddy, Barry or Jerry for any further guidance.

FOR THE CHANNEL LEAGUE, MATCH REPORTS AND TEAM NEWS, PLEASE FOLLOW THE LINKS