The second coaching session took place on a dry but decidedly chilly day at Mendip Spring. The boys had been told to wear plenty of layers of clothing, and Coach Ian slightly altered the programme to ensure the squad kept on the move. The intitial session took place in the driving bays at the course where the boys where given some drills to help them shape various shots - notably drawing and fading the ball together with a punch shot to work on a lower trajectory. We then went to the putting green where the squad could check the alignment of their putting stroke to ensure a consistency of strike. A few little obstacle were also put in place to see the path of the ball after leaving the club. The boys were beginning to feel the cold at this point, so we retired to the clubhouse to get warm and the boys enjoyed a mug of hot chocolate as Ian gave them an update of the work already done. 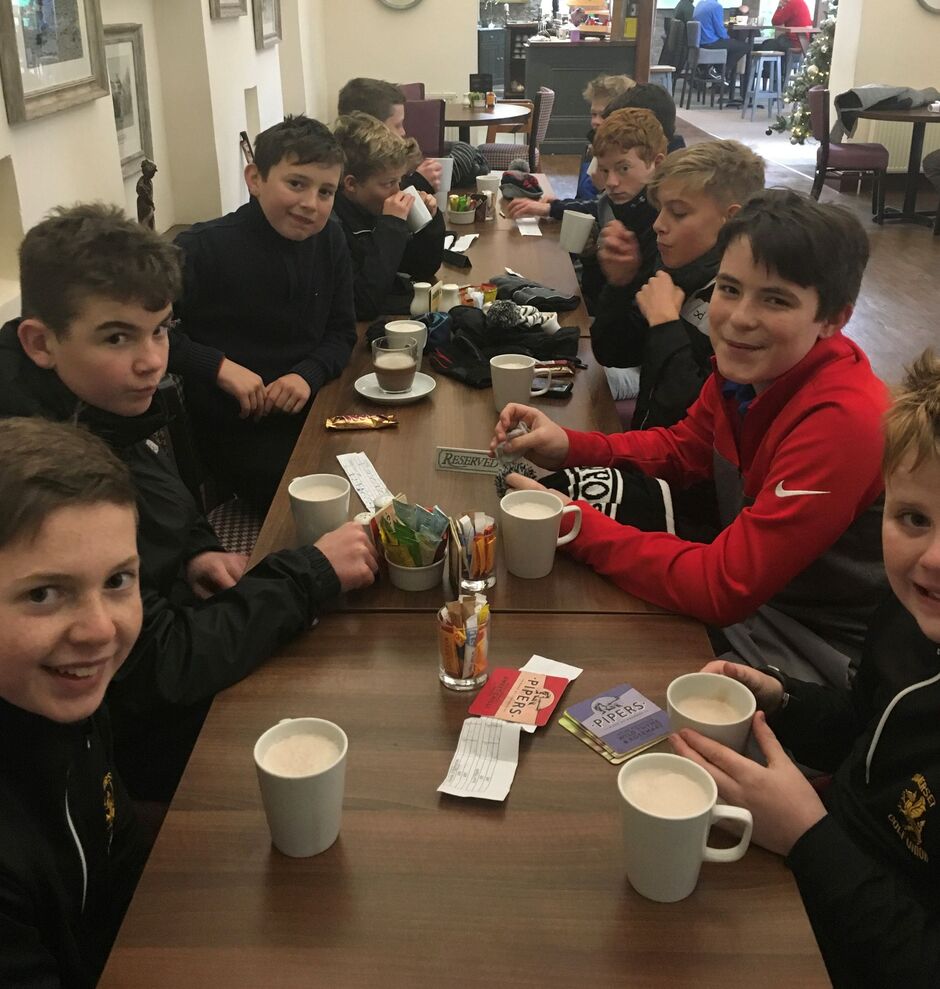 After the break it was off to the short game area for a matchplay challenge over three disciplines - chipping, pitching and bunker shots. Josh Barless was the overall winner after a 3 way play off. We then went onto the Lakeside Course for 9 holes of greensomes strokeplay. Cameron Fear and Thomas  Richardson proved to be a strong pairing, coming out on top with a score of level par

Ian Vibert held the first Under 14  Winter Coaching session for the squad members at Mendip Spring on 17th November. Despite the day threatening rain, all of the squad turned up keen and raring to go. Our boys were out early on the putting green whils the Under 18 Squad stayed in the Clubhouse catching up on the golf on television! 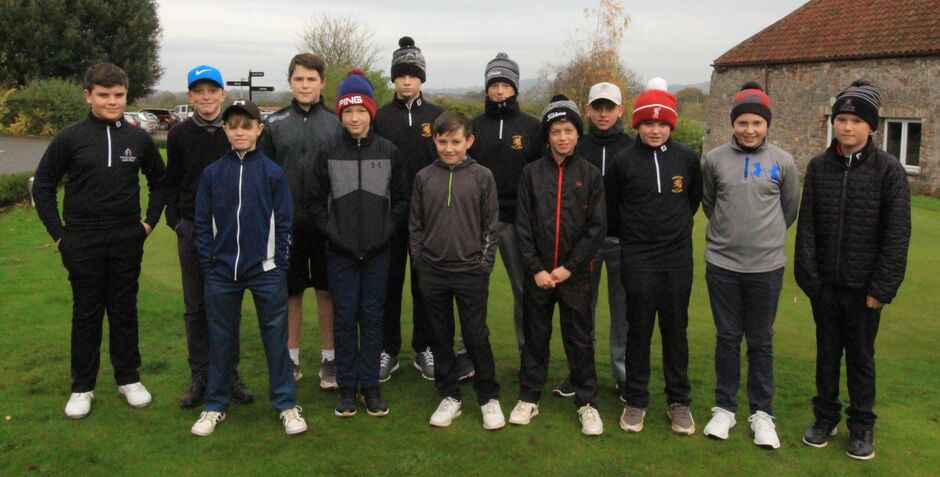 The boys were split into two groups for the first sessions, one heading to the driving range with Ian for a full swing analysis, whilst the second group practised putting drills watched by the new Team Manager Richard Dix.

The group then moved onto the short game practice area where they were asked to show their skills over 4 disciplines - bunker shots, chipping, chip and run and pitch shots. Points were awared for being within the target area with bonus points for holing the shot. Whilst all the boys demonstrated their ability to hit the shots, it showed that those who had the best control of distance gained the most points. This is an area that Ian will develop further in the next session.

After a break for lunch, the squad went out onto the Lakeside course for 9 holes of strokeplay, again under the watchful eye of Coach Ian.

Our thanks as always to Chris Mikulla for allowing us the use of Mendip Spring Golf Club, and to all the staff and members who were as helpful and hospitable as ever. We shall be returning for another session on December 1st before taking a break until the New Year

Foursomes are often what makes the difference in County matches. If your leading at lunch the afternoon always seems a little less difficult. So when the U14’s ground out a commanding 3.5-0.5 lead there was reason to expect victory.

In the other 6 singles a Somerset win was not guaranteed and at one point on the back 9 Devon looked capable of pulling a win out of the bag..

Gritty wins by Freddie Lovell 1up and Alex Frame 1up was just enough to ½ the afternoon singles and see Somerset triumph 7.5 – 4.5.

A sublime day greeted the County players and with it being our first match of the season everyone was primed after Winter training and ready for action against Gloucestershire who always provide stiff opposition.

The Channel course at Burnham and Berrow is always a stiff test and the players were challenged throughout the day. We started with four matches of foursomes and Gloucestershire were quick out of the blocks taking the first match 5&3, the other 3 matches were much closer and all of them went down the last, with neither County being able to secure a full point. It was tense watching and the lunchtime score of 1 1/2 - 2 1/2 ensured a tight afternoon singles session.

Time for lunch and some excellent pasta supplied by the Burnham & Berrow catering team fuelled the young players.

First up for Somerset,Tom, and on paper it looked as though it was going be some match and so it proved with his opponent securing victory on the 17th. Dylan turned the tables in the second match and got a point on the board with a right to left eight footer also on the very tricky par 3 17th. Third and fourth out were Theo and Freddie and it was a case of honours even with the former winning convincingly and the latter finding it tough against a strong opponent. Next up Cameron F who was followed immediately by Cameron S, both matches ended in a result of 5&4, with the former securing a solid victory and the later never being able to peg back a very quick start by his opponent, all credit to him for hanging in there. Onto our last two players, Thomas and Lowen, the latter was up against it on paper and so it proved on the course, however Thomas who was making his County debut romped home with a 6&5 win. Honours even in the afternoon 4 points a piece.

It was a very tight match, with all of the boys behaving impeccably and enjoying the challenge and competition. I would like to thank Gloucester for being such sporting opponents, Burnham & Berrow for use of the course and their excellent hospitality and also the parents for their support.

It was a very encouraging start and onwards and upwards for the season ahead..

On a wet and breezy day when adults remained in the club house enjoying a coffee the Somerset young guns took on the Cornish U14's. As the morning foursomes got underway the weather began to improve and with the heavy rain easing some good match play was witnessed by those brave enough to venture out in support. It soon became clear that the visitors were ready for the challenge and by the close of play am Cornwall had opened up a 3-1 lead with our only point coming in match 3 as Thomas Richardson and Troy Young impressed to win 3/2.

The afternoon singles are played in handicap order and as the team sheets were drawn up a sizable handicap advantage in favour of Cornwall suggested  afternoon points were going to be hard to come by.

Match 1 step forward Dylan John who along with his Saltford team mates had pulled off a truly remarkable victory the previous day having won the English Junior Team Championship at Woodhall Spar. Credit where credits due it’s a very long journey back so turning up to play is a great example of how committed Dylan is. One may have expected a struggle especially as his opponent Jack Kevern has the lower handicap. Step forward a true competitor and as his game progressed there was only ever 1 winner as our Somerset lad came home 3/1 winner

Thomas Richardson was unable to bridge the gap in handicap losing 3/1 as Theo Anderson-Gannon battled and gained a well deserved ½. Match 4 saw a close fought contest unfortunate went in favour of Harry Drewett, victorious over Somerset’s Cameron Fear. Freddie Lovell (Capt) and Joseph Cox were always on the receiving end, both losing 4/3 as Troy Young went down 3/

Step forward Somerset’s smallest player Joshua Barlass on debut. Wearing his County shirt with pride Joshua displayed a determination beyond his years. The longer his match went on the more his confidence grew. 1 up after 7 the smile growing with every putt sunk. Thumbs up to the County Chairman through 8 suggested a very bright future to come. Thumbs up again and again as young Joshua chased his first ever County victory. What a fine result 3/2 win and Josh was over the moon. His attitude was a credit, his determination obvious, well played young sir.

Although the boys lost 3.5 – 8.5 the overall day had many positives. With better course management and more experience there are signs that this young side has a bright future. Well played Cornwall, worthy victors on the day.

9 boys travelled to Truro Golf Club to represent Somerset in the Under 16 and Under 14 South West Regional Championships. The team was managed by Kevin Purdy with Jackson Carey as their inspirational Captain. During the practice round, it soon became apparent that, whilst not long, Truro would present a strong challenge in course management. This was reinforced by Kevin in the team meeting where he also reminded the boys that they not just competing individually but as a part of Team Somerset. Every stroke on the course would have a bearing on the overall result and that everyone should persevere until the final putt was holed. Jackson added some words of encouragement and wished everyone well for the day.

What a day it turned out to be for Somerset, winning the overall team competition and dominating the individual Under 14 Championship. Freddie Turnell won the gross competition and entry to England Golf’s Carriss Trophy with Alex Marshall as the runner-up. Alex chose though to take the trophy for the best nett score on the day.

The team was supported over the two days by Chairman Tommy Tulk and Richard Dix as well as the families of the team members who were all enthusiastic supporters. It was a great shame that, due to their other commitments, coaches Ian Vibert and Jack Heginbotham were not there to share in the joy of the day. This was a magnificent tribute to the commitment they have brought to their roles and shows the depth of talent that has flourished from their input.. 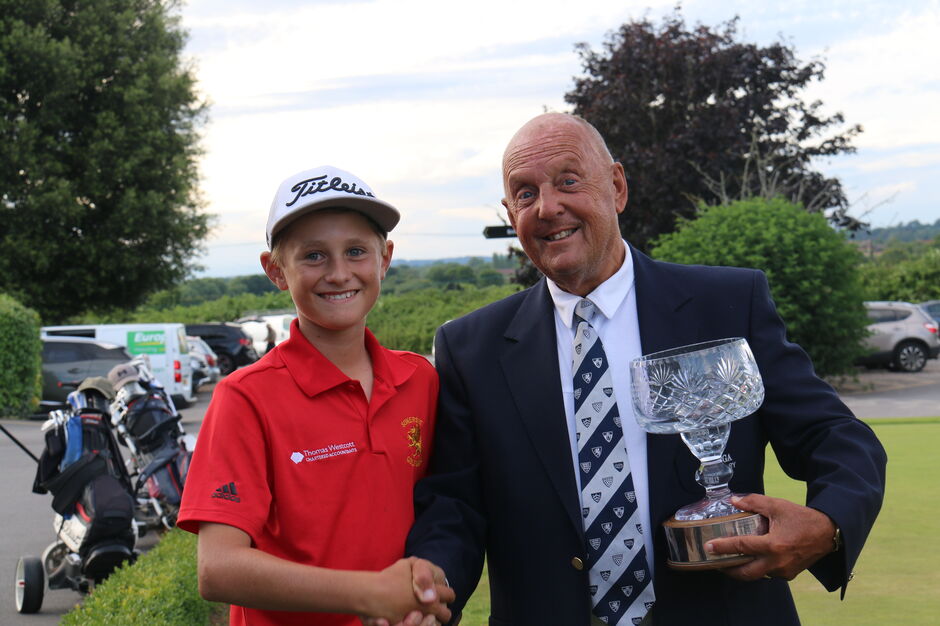 This week the youngest members of the Red Army ventured South to take on Dorset Under 14s. Ashley Wood Golf Club was the venue and with Summer disappearing for 24 hours, layers were the order of the day.
The day started with nine holes of Foursomes and Dylan and Theo headed out and led from the front with a solid 4&3 win. Next up was Freddie and Ryan and it was very much the power match of the morning, with some awesome driving and Dorset just edging it 2&1. It was then down to Lowen and Troy, who found their opponents in superlative form and were beaten 5&3. The anchor match involved Cameron and Toby who took the match down the last only for their opponents to birdie the hole and secure a 1up victory.
Time for a re-group, an excellent lunch and bring on the afternoon. The weather worsened and after the mid-day team talk and re-fuel, courtesy of a well known brand of sweet, the team took to the course. First up Dylan who had a right tussle eventually losing on the last. He was followed by Ryan and Freddie who battled well only to both lose on the 15th. The performance of the day came from Theo who backed up his morning victory with a 6&5 success in the afternoon, first point of the afternoon on the board for the Red Army. The next match involved Cameron who fought dourly to take his match to the Par 3 last, only for his opponent to knock it to 8ft and seal victory. Following him were Lowen, Toby and Troy who were all against strong opponents and although they persevered admirably succumbed in the last few holes.

It was a tough day for the lads and the final score of 10-2 does not do them justice, as the matches were close, they all behaved impeccably, tried their hardest and were a credit to their County. Onwards and upwards from now on an we look forward to our next match.

May I take the opportunity to the Thank Dorset for their hospitality, Ashley Wood Golf Club for looking after us so well and the parents for their support.